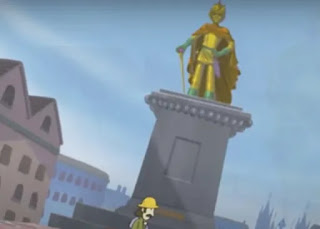 Once upon a time, there was a statue of a Happy Prince in the middle of the city. The statue was decorated with gold and precious diamonds. A large ruby was studded in its sword.

One stormy and cold night, a little swallow was left alone. He was looking for a place to sleep. He saw the figure and decided to spend the night at the feet of the statue of Happy Prince. He came down to sleep under the feet of the statue. Suddenly some drops of water fell upon his face. He saw that the statue of Prince was crying. Swallow asked the prince who he was. The Happy Prince answered, “I am the Happy Prince.” The swallow asked him the cause of the crying.

Friendship of Swallow and Happy Prince

Happy Prince replied that when he was alive, he did not see any kind of hardships or sorrows. But when he was dead, they placed his statue here where he can see the misery of the people. He said, “I wish to help the needy and poor people but I can not do anything and even can not move from my place. All this makes me cry. I am going to tell you about some people who are in trouble. One of them is a poor woman. Her son is ill. She has nothing to buy fruits or medicines for her sick son. My sweet swallow! Take the ruby of this sword and immediately give it to the poor woman.

The Service of The Swallow

The swallow agreed to do this. He flew to the poor woman’s house and gave the ruby to the poor woman and flew back to the happy prince again. He said to the Happy Prince, “I have done all the work honestly that you had assigned to me. Although it is cold; I can feel the warmth of pleasure of serving the poor people.” The swallow slept there between the feet of the Happy Prince.

The next night, when the swallow came again, the happy Prince told the swallow about a writer who was very weak and hungry.

He said to the swallow, “it is very cold. The poor writer has no fire on this cold night. He is trying to complete a book but he cannot write due to cold and hunger. Please take the diamond out of my one eye and give it to him.” The swallow obeyed as the happy Prince had asked him to do. The writer sold the sapphire and bought food to eat and fuel to keep his room warm. Thus, he completed the book easily. The swallow spent the day in the city and at night again came to rest between the feet of the Happy Prince.

The mayor of the city passed by and look at the statue. He said that there was a time, this statue was beautiful and had a nice look. Now, it has become very dull and its beauty has vanished.” The mayor ordered his servants to pull down the statue and throw away the dead body of the little swallow. The soldiers pulled down the statue they melt it but the heart of the prince did not melt.

Real happiness is to serve mankind.

Allah loves those, who love His creatures.