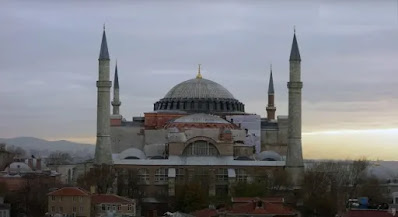 History of The Hagia (Aya) Sophia

The Turkish president opened the Hagia Sophia mosque for Muslims and offered Friday prayers. Since when was it closed? Who built it? And what is the historical status of this building? Let’s try to find the answers to these questions and look at history.

The Hagia Sophia, Constantinople, the old name of Istanbul, was the seat of the Orthodox clergy and the center of Byzantine royal festivities.

Hagia Sophia, long known as the Sofia Museum, was an early church. This church later became the Eastern Orthodox Church. It was given the status of a museum in 1935. It is located in the Turkish part of Thrace in the Turkish city of Istanbul.

The first church built here, on the same site in the 4th century AD, has no traces left. Immediately after the destruction of the first church, Constantinople II, son of Constantine I, built the second church. But it burned down in the Nika riots of 532 AD. King Justinian, I rebuilt it under his personal supervision and renamed it in 537 AD.

The Byzantine poet Silentry wrote poetry on the construction of the church. It has long been considered one of the most beautiful buildings in the world. Hagia Sophia is a central dome-covered building 31 meters (102 feet) in diameter. It is 56 meters high and slightly smaller than the Roman pantheon. The weight of the dome is on a special type of arched pillar. In fact, these are 4 triangular-shaped concave structures that help solve the problem of how to place a round dome on a rectangular building. The burden of the Hagia Sophia dome rests on the arched pillars, while the weight of the pillars rests on the four strong pillars in the four corners of the building. These pillars have four arches on which the dome can be seen floating.

When an earthquake in 989 AD destroyed the dome of St. Sofia, the Byzantine government called in an Armenian architect to restore it, having previously built large churches. The decoration of the building, included mosaics, marble pillars, and unique coverings. It also had a special significance in terms of art. In fact, the building was so artistically decorated that Justinian took care of the largest church ever built. It was the largest church in a thousand years. Even a larger church was built on the site of Savile.

This masterpiece by Justinian was a beautiful combination of Roman architecture, ancient architecture, and Byzantine architecture. Its effects were far-reaching in the Eastern Orthodox, Roman Catholic, and Muslim worlds.

At Justinian’s command, eight Greek-style pillars were uprooted from the site of Balbek in Lebanon and brought to Hagia Sophia.

Hagia Sophia has been a center of special interest to historians and architects of dome art. Because the way the real architects built the dome was very innovative. The way the dome was supported by arched pillars was not seen in any other building before. Due to these arched pillars, the weight of the round dome was transferred to the square pillars below the beautiful shape. One of the aesthetic qualities of the arched pillars was that they controlled the strength of the dome and made it possible for the weight of the dome to gradually decrease.

Another interesting thing about the dome was the forty windows that were built around it at the bottom. Hagia Sophia was famous for the spiritual beauty of the light that came through the windows in the middle of it. It gave the impression that the dome was still in the air like a winged bird. This design was possible because it resembled the interior of a dome canopy with its ribs extending from the top of the dome to the base. These ribs balanced the weight of the dome between the windows. And slowly the archers moved to the pillars and then to the base.

The building was damaged several times by earthquakes. Its dome collapsed in an earthquake in 558 AD and was rebuilt in 563 AD. The 989 earthquakes also caused some damage. The church was converted into Roman Catholic Cathedral during the Italian occupation (1204 AD to 1261 AD).

Ottoman architects repaired the building several times. The most famous and extensive work was done by an architect named Sanan, a famous builder in history. He built the building in the 16th century to support the building and demolished the old minarets to make new ones. He added a pulpit according to Islamic art. In 1935, Hagia Sophia was turned into a museum by the order of Turkish President Kamal Ataturk.