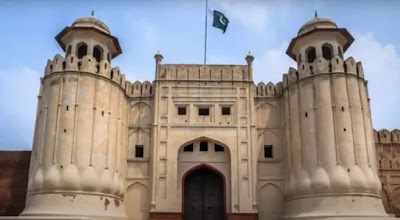 The masterpiece of Mughal Architecture

In the north-western part of the city of Lahore, one can be seen standing with dignity. The fort is a collection of many buildings built in different periods. And the fort’s siege is spread over an area of ​​50 acres in a square shape. Although it is difficult to determine the beginning of the construction of the fort, the present fortification was started by the Mughal emperor Akbar. Evidence has also been found that when Mahmud Ghaznavi I invaded this area in 1021 AD, there was a word made of clay.

It will be interesting to note that in 1959, the Archaeological Survey of Pakistan excavated land near the Diwan-e-Aam and found a gold coin 25 feet below, which belonged to the time of Mahmud Ghaznavi. Excavations 15 feet further found evidence that there was a population here even before Mahmud Ghaznavi’s invasion.

Emperor Akbar founded the earthen Fort, Agra Fort, in 1566. Every Mughal king, Sikh, and British who came after him also added some palace, bungalow, or a wall to it. After which Lahore Fort became a building that exemplifies the construction of every period before Pakistan. If we talk only about the Mughal period, Jahangir added gardens and palaces to it. Shah Jahan added Moti Masjid, Diwan-e-Khas, royal residence and Nolakha Mahal. Aurangzeb Alamgir, who was not keen on building, also built Alamgiri Darwaza and Badshahi Masjid.

The explicit construction of the fort appears to be part of a book of stories written about the East. Between the eastern and western walls of the fort are two large gates, the entrance to which is now called the Universal Gate. Made in two parts. First, the administrative part includes Diwan Aam, Diwan Khas, and some gardens. Second. The residential area, which includes the northern court and the Elephant Gate, also has a glass palace and small gardens. The bullet marks on the walls near the Elephant Gate are relics of the Sikh Civil War of 1847.

First of all, the main entrance of the fort was in front of the Maryam Zamani Mosque. The universal gate was to enter the Badshahi Mosque through the Holy Garden. Adjacent to the fort, this mosque built by Aurangzeb Alamgir is the best example of Mughal architecture. And it was the largest mosque in the world in its time. There is also a museum with a model of the Taj Mahal made of ivory. There are some rare manuscript manuscripts, including the Akbar Namah written during Akbar’s time. Here are some interesting examples of small size paintings and Mughal coins. The fort was annexed by the British in 1846 and was closed to the public after 1853.

When the British rule ended and Pakistan came into being in 1947, the fort was reopened to the public on November 11, 1949, after 90 years. Not everyone here knows that the Red Fort is closed to Delhi tourists and the Agra Fort is only partially open.