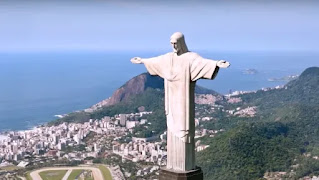 Hidden Facts of The Christ the Redeemer

I. This is the first time that soapstone has been used in this way.

Jesus the Savior is the name of a statue of Jesus in Rio de Janeiro, Brazil. The 38-meter-tall, 630 metric tons statue stands on the 700-meter-high mountain peak Corcovado in Tejoka Forest National Park. And its direction is towards the city.

The idea to build a large statue on top of Mount Corcuador was first mooted in the mid-1850s. When a Catholic priest, Pedro Maria Boss, asked Princess Isabel to fund a religious monument.

Princess Isabel ignored the request. When Brazil became a republic in 1889, there was no room for such an idea. Because in the constitution the state and religion were separated from each other. The idea was first mooted in 1921 by a section of the Catholic Church in Rio de Janeiro. And organized a special week in support of his ideas.

When ideas were asked for a statue, someone suggested that Jesus (PBUH) should be shown holding a globe in his hand. Someone said that it was enough to make a globe on a large scale. He was chosen to be seen with his arms outstretched in the air. The idea was put forward by a local engineer.

The sculpture was done by ُPaul Landowski, a French sculptor. A group of architects, after considering Landwhiskey’s proposal, decided to make the cross-like statue out of extra-strength concrete instead of steel. The people entrusted with the task of building the statue lived in a makeshift wooden room near the statue for many years. A special railway track was built to carry construction equipment up the hill. Today, the rail carries tourists to the top through this track.

The outer surface of the statue is made of soapstone. It is a multicolored type of talc or mica which is found in the form of crushed stone. If you touch it, you will feel greasy or soapy. It is used in stoves, fireplaces, etc. Because it is easy to mold and unique in durability, it was chosen.

So far, many improvements have been made to maintain the quality of the statue. Lighting systems, glass elevators and escalators have been added. Older people can now easily reach it, otherwise by 2002 everyone had to climb 220 stairs.

In February 2008, a thunderstorm wreaked havoc in Rio de Janeiro. Lightning struck the statue, but the outer surface of the soapstone protected it from any damage, as the stone is a non-conductive element for electricity.

This statue has now become the hallmark of Christianity. It is a vast resort that is also a good source of income for the country. If someone goes to Brazil and doesn’t go to this place, it can’t happen. It is especially popular with tourists from Christian countries.