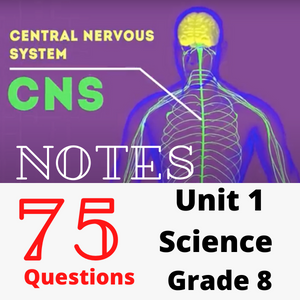 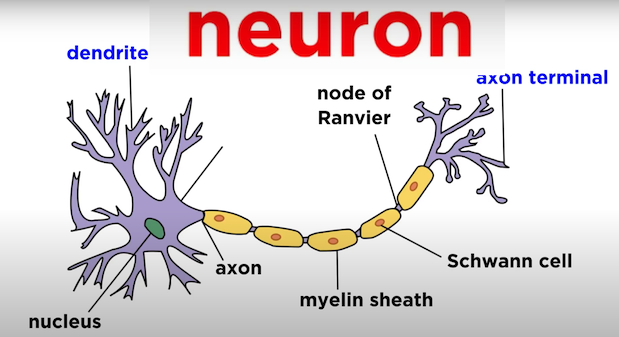 Ans: A nerve is a cable-like bundle of axons present side by side in a sheath.
16. What is the function of nerves in your body?
Ans: The nerve conveys the messages carried by the neuron from one body part to another.
17. In how many parts brain is divided? Or name the parts of the brain.
Ans: Human brain is divided into three parts.
i. Forebrain ii. Midbrain iii. Hindbrain
18. Which is the largest part of the brain?
Ans: Forebrain is the largest part of the human brain.
19. Write the names of the main parts of the forebrain.
Ans: Forebrain has three parts.
i. Cerebrum ii. Thalamus iii. Hypothalamus
20. Which types of actions are controlled by the cerebrum? Or write functions of the cerebrum.
Ans: The cerebrum controls many actions like thinking, feelings, emotions, seeing, hearing, speech, memory, and decision making.
21. What is the function of the thalamus?
Ans: It controls many sensory functions.
22. Make a diagram of the brain and label its different parts.
23. What are the functions of the hypothalamus?
Ans: It controls body temperature, hunger, and thirst.
24. Where is the midbrain situated?
Ans: It is present below the cerebrum. It is a small part of the brain.

25. What is the function of the midbrain?

Ans: It receives messages from sense organs and sends them to the appropriate part of the brain.
26. How many parts are the hindbrain?
Ans: Hindbrain consists of three parts.
i. Cerebellum      ii. Pons      iii. Medulla Oblongata
27. Which part of the brain maintains the balance of our body? Or What is the function of the cerebellum?
Ans: Cerebellum maintains our body balance and accurate movement of our body.
28. What is the function of Pons?
Ans: It controls many functions like the taste, swallowing, equilibrium, and sleep. It is present below the midbrain.
29. Where is medulla oblongata present and what are the functions of the medulla?
Ans: It forms the posterior part of the brain. It is connected to the spinal cord.
It controls heartbeat, breathing, and digestion. It keeps on working when the rest of the brain goes to sleep.
30. What is the weight of an adult man’s brain?
Ans: The weight of the human brain is about 1.5 kg.
31. How many neurons are present in the human brain?
Ans: It consists of about 100,000,000,000 neurons.
32. What is the spinal cord? And where is it present?
Ans: Spinal cord is an extension of the medulla. It is also made up of inter-neurons.
It runs inside the backbone up to its lower end.

33. What is the function of the spinal cord?

43. What is meant by reflex action? Give some examples.

Kidneys remove nitrogenous materials and salts from the body through urine.
Its functional units are nephrons.

Lungs:
Lungs remove carbon dioxide gas during respiration
Its functional units are alveoli.
49. What is the difference between lithotripsy and dialysis?

Shock waves break the stones into small pieces which are passed out of the body through urine.

It is a permanent treatment.

50. Why is the motorcyclist advised to wear the helmet?
Ans: Human brain is a very sensitive part. It controls all the body’s actions, so, it is very necessary to protect the brain by using a helmet.
51. A person met an accident in a car. When he was brought to the hospital he did not know even his name. What would have happened to him? Relate your answer concerning your nervous system.
Ans: He would get an injury in his forebrain which results in the loss of memory.
52. What is meant by excretion?
Ans: Removal of extra products (nitrogenous waste material) from the body is called excretion.
53. What is the excretory system?
Ans: Nitrogenous material, extra water, and salts are removed by the excretory system.
It consists of a pair of kidneys and associated structures, two ureters, a urinary bladder, and a urethra.
Some extra salts are removed through the skin during perspiration. Lungs are also excretory organs.
54. Where are kidneys present in the human body?
Ans: Kidneys are present in the lower abdominal region on both sides of the vertebral column.
55. What is the function of kidneys?
Ans: The kidney filtrate extra salts and waste material from the blood and remove them from the body.
56. Which structures are associated with kidneys?
Ans: Two ureters, a urinary bladder, and a urethra are associated with kidneys.
57. What is the internal structure of the human kidney? Draw a diagram of the human kidney and label its parts.
Ans:

The Structure of Kidney

The kidney is divided into three regions.
i. Renal Cortex: It is the outermost region
ii. Renal Medulla: It is the middle region. It is divided into two conical masses called renal pyramids.
iii. Renal Pelvis is an inner area where urine is drained. The urine from the renal pelvis moves into the ureter.
58. What is a nephron? What is the basic unit of the excretory system or kidney?
Ans: Nephrons are the basic functional units of the kidney.

59. What is the structure of the nephron? Make a diagram of the nephron and label its parts.
Ans: Nephrons are the tubules where urine is formed. Each nephron has two parts.

This part has two structures.

60. In which part of nephron filtration of blood occurs?
Ans: The filtration of blood occurs in Bowman’s capsule.
61. Draw a diagram of Bowman’s capsule and label its parts.
62. Where does re-absorption take place?
Ans: During its passage towards the collecting duct, 99% of the filtrate is reabsorbed into the blood capillaries around the renal tubule.
63. What is the composition of urine?
Ans:

64. What is the common cause of stones in kidneys?
Ans: Accumulation of salts in kidneys results in kidney stones.
65. How can we remove a stone from our kidneys?
Ans: Kidney stones can be removed by using more water, by lithotripsy, or by surgery.
66. What is meant by lithotripsy?
Ans: It is a treatment that is used to remove medium-sized stones from the kidney.
Shockwaves break the stones into small pieces which are passed out of the body through urine. It is a permanent treatment.

72. What do you mean by a kidney transplant?

Ans: In this method, a healthy kidney is grafted into the body of the patient. The donor of the kidney may be a close relative. This method is used at the last stage of kidney failure.
73. Why a motorcyclist is advised to wear a helmet?
Ans: Human brain is a very sensitive part. A small accident may hurt the brain which may result in loss of memory or madness. That is why it is advised to wear a helmet while riding the motorcycle.
74. A person met an accident in a car. When he was brought to the hospital he did not know even his name. What would have happened to him? Relate your answer concerning your nervous system.
Ans: Speaking, thinking, and memory are controlled by the forebrain. He got an injury in his forebrain and his memory was affected.
75. The table below shows the list of your daily activities. Write the name of that part of the brain which is controlling this activity.