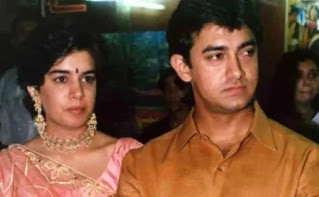 Why did Aamir Khan’s second marriage also break down? Why did Kiran Rao got divorced?

Mumbai: Superstar Aamir Khan and producer-director Kiran Rao on Saturday divorced after 15 years of marriage. They announce their decision in a meeting that they are ready to start a new chapter for each other as co-parents and family. The couple said in a joint statement that they would continue to work as partners in films, their NGO Paani Foundation, and other professional projects.

The age of Aamir Khan is 56, and Kiran Rao is 47, met for the first time on the sets of the actor’s 2001 blockbuster “Lagaan” and got married in December 2005. In 2011, Aamir’s wife Kiran gave birth to a son named Azad. Announcing the divorce on Saturday, the statement read,

In the past 15 beautiful and successful years together we have shared our joy, and laughter, and our relationship has only grown in trust, respect, and love. Now we would like to start a new life span in our life – we will no longer live as family-like before. But will stay connected as a family and take care of the child together.

Will take care of son together

They made a statement and said that they took the decision of divorce a while back and now feel comfortable formalizing the arrangement. Despite living apart, they share their lives as one extended family.” Khan and Rao said that they would take the responsibility of parenting our son Azad, whom they would raise together.

“About this development in our relationship, he thanked his families and friends for their continued support and understanding, and without whom we would not have been so safe to make this decision. We request our well-wishers for their best wishes and blessings and hope that like us, you will not see this divorce as the end, but as the beginning of a new journey.”

Khan, who starred in acclaimed films like “Qayamat Se Qayamat Tak”, “Sarfarosh”, “3 Idiots”, “Talaash” and “Dangal”, was earlier married to Reena Dutta. They have two children – son Junaid Khan and daughter Ira Khan. In the future, Aamir Khan will next be seen in “Lal Singh Chaddha”, the official Hindi remake of Tom Hanks’ acclaimed film “Forrest Gump”. The film is being produced by Kiran Rao, who collaborated on several other films including “Dangal” and “Secret Superstar”.