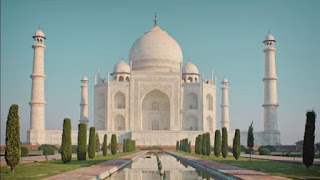 Eighth Wonder of the World

The Taj Mahal is considered to be the eighth wonder of the world since its construction. According to Western historians, no building has ever been more beautiful than this. According to the book ‘Badshah Namah’ written in the time of Shah Jahan, the purpose of constructing such a building is in fact an acknowledgment of the glory of God who created the world.

The Nobel Prize-winning Bengali poet called the Taj Mahal “a shining tear on the face of time.”

The Taj Mahal holds the most unique position in the total architecture of the Mughal rulers. It is all made of marble. Its constructive beauty, especially at sunrise and sunset, is difficult to describe in words.

This is not a building, but a lament written in marble or a dream come true.

The Taj Mahal in Agra, India, was built in the 16th century by the Mughal emperor Shah Jahan in memory of his beloved wife, Queen Mumtaz Mahal.

The Taj Mahal is a mausoleum with the tomb of Mumtaz Mahal in the basement. Sometime later, when Shah Jahan died, his grave was made equal to his. Mumtaz Mahal’s real name was Arjumand Bano. It was the Mughal tradition to give a new name to the important women of the royal family on the occasion of their marriage or after any other important event. And then the same name would become popular. Shah Jahan’s real name was Shahabuddin Muhammad. And from 1628, when he was not king, he was called Prince Khurram.

The Taj Mahal was completed in twenty years. 20,000 workers took part in its construction. At the time of its completion in 1648, the estimated cost was Rs. 32 million. Keep in mind that in those days the price of a gram of gold was one rupee forty paise. In July 2021, the price of gold is one lakh five thousand rupees. In that sense, it is worth Rs 24 billion at present.

According to tradition, the original name of this building was Roza-e-Mahal. In Hindi, it was difficult to pronounce the Persian word “Rozae” and in the name of Mumtaz Mahal, “J” is used instead of “Z”. Thus the original name was changed to Taj Mahal.

Many of the makers of this building are named, but the most prominent is Isa Khan. He was a famous architect of his time and belonged to Iran. Other names include Abdul Karim, Makramat Khan, and Ahmad Khan Lahori. Calligraphy by Amanat Khan Shirazi and stone carving by Charan Lal. Specialists from Qanauj, Delhi, Lahore, and Multan took part in the construction work. Experts from Baghdad, Shiraz, and Bukhara were also called in for special work.

If other structures besides the mausoleum are included in the Taj Mahal building, it is called the “Chahar Bagh” style of construction. The Mughals built all their tombs in this style because they believed that this would be the order of the gardens in heaven. Its total area is 300 x 300 meters. The corridors in the gardens are made a little higher than the ground. And they divide the four gardens into four more parts. In this way, sixteen boards are formed for growing flowers. In the pond in the middle of the garden between the mausoleum building and the entrance, a complete reflection of the Taj Mahal can be seen. In addition, the gardens have trees and fountains.

The Taj Mahal is built on a high platform, 186 feet wide and long enough to withstand flooding in the Jumna River.

Inequalities become eight aspects. There are two buildings made of red stone around the shrine, one of which is a mosque and the other is a guest house. The guest house is now used as a museum. This construction structure uses the Arabic concept of construction. In which each part of the building has a separate status and part of the main building is also visible.

It is based on the principles of balance in geometry and architectural details. Its main dome is 58 feet in diameter. And it’s 213 feet above the ground. The top of the dome is mapped with a lotus flower. Due to this flower, the height of the dome is more visible than the original. The gold crown on the top of the dome lasted until 1800. But now it has been replaced with bronze. Iranian and Indian decorative styles were combined in the construction of the class. The moon above the climax, with its tips pointing towards the sky, is considered the main symbol of Islam.

Of the four beautiful and majestic towers of the Taj Mahal, each is 162.4 feet high. Calligraphy has been carved in all the tombs. It uses precious stones such as onyx. Quranic verses are engraved on the outer parts of the doors and flowers are made in a continuous pattern. These flowers add to the beauty of the building. The walls of the main room of the mausoleum and the four adjoining small rooms are also decorated in an Islamic style.

When Allama Iqbal, a poet of the East, was asked about the Taj Mahal, he said,

“The Taj Mahal on earth is like an egg in a white ceramic clay plate.”