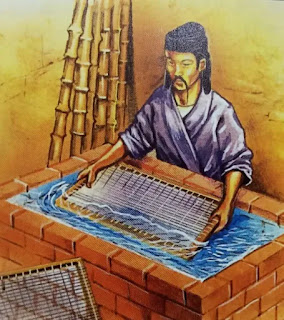 When and where was the first paper prepared?

Paper is a very important need of the present age. Paper is very important, be it office work or education. In this age, paper has become a necessity for every nation and every individual, but have you ever wondered when paper was first made? What are the stages of his current condition? At present, cotton, moss, a special type of grass, wheat, and rice straw are also included in its preparation. The best type of paper is made from cotton. But first of all, what made it?

How Pulp was made?

Two thousand years ago, Tsai Lin, a native of China, invented paper. It took the fibrous inner bark of mulberry. The bark was soaked in water until its fibers did not form into separate piles of straight threads. Now a pulp was formed. The pulp was spread on a smooth plank of finely cut bamboo. Pulp water and juice dripped down the bamboo grooves. Its thin layer dried up. The result of its complete drying was the first layer of paper. Which was fibrous and smooth. As time went on, like other human inventions, the evolutionary journey of paper continued and continued to improve. In the second stage, it was further improved by lightly spraying the cliff on a sheet of paper.

Improvement in the paper industry

The Chinese also had another hidden knowledge. He knew the work of weaving silk cloth, which no other nation of that time knew. European merchants traveled to China from distant lands to obtain and trade. Chinese merchants also traveled to Arab countries in the Middle East and remote parts of Russia, so the secret of making paper spread all over the world. Paper proved to be a revolutionary invention, the full production of which began worldwide. Louis Robert was a Frenchman who succeeded in inventing a machine that could produce paper with a never-ending sequence. It was further improved by the Ford Rainers of London in the early 19th century.