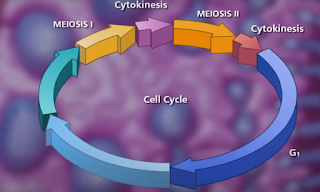 School-Based Assessments grade 8 all subjects with answers.
1. What is a cell?

Ans: Cell is a basic structural and functional unit of living organisms. All living things are made up of cells.
2. Where do new cells come from?
Ans: New cells are produced by the divisions of pre-existing cells.
3. What is meant by cell division?
Ans: The process by which a parent cell divides into daughter cells is called cell division.
4. Why do offspring resemble their parents?
Ans: It is heredity that produces resemblance in the offspring with their parents.
5. What is a parent cell?
Ans: The cell which divides is called the parent cell.
6. What is a daughter cell?
Ans: The cells which are produced as a result of cell division are called daughter cells.
7. What is interphase?
Ans: Before the start of cell division, the parent cell passes through a phase called interphase.
8. Which are the phases of cell division?
Ans: The process of cell division involves two phases, i.e., nuclear division and cytokinesis.
9. What is nuclear division?
Ans: Division of a nucleus is called nuclear division.
10. What is cytokinesis?
Ans: Cytokinesis is the division of the cytoplasm.
11. Which part of a cell controls its activities?
Ans: The nucleus of a cell controls its all activities.
12. What does DNA stand for?
Ans: DNA stands for Deoxyribonucleic Acid.
13. What is meant by DNA? / What is heredity material?
Ans: DNA is material that contains a complete set of instructions for developing a new cell or an organism. DNA is called hereditary material.
14. What is meant by gamete cells?
Ans: Gametes are sex cells. Gametes are of two types egg (Female cell) and SPerm (Male Cell)

Chromosomes are thread-like structures found in the nucleus of a cell. A chromosome consists of two arms called chromatids which are attached to the same part called a centromere. The number of chromosomes is specific and constant for every kind of organism. In human beings, every somatic cell has 46 chromosomes in the form of 23 pairs. But every sperm or egg cell has 23 chromosomes.
31. Draw a diagram of the chromosome and label its parts.
Ans: To see the answer download pdf format. link is shared at the end of this page.
32. Define heredity and describe its importance in transferring characteristics from parents to offspring?
Ans: Heredity: The transmission of characters from parents to offspring is called heredity.
Importance: The number of chromosomes is reduced to half in gametes. It means that hereditary material is also reduced to half in gametes. When sperm and egg fuse with each other, they form zygotes. In this way, complete hereditary material is restored in the zygote. The characters’ physical and functional units are transferred in the zygote. After passing through various changes zygote develops into a new baby.
33. Describe the characters that can be transferred from parents to offspring.
Ans: Eye color: The color of eyes in an organism is controlled by a pair of genes. Thus it is an inheritable character. The genes control the production of brown pigment in the iris of the eyes. If the genes work and produce more pigment, the eyes are black. Production of very little pigment results in light brown eyes.
Attached and Free Earlobes: Some people have attached and some have unattached (free) earlobes. This character is also controlled by genes. When the genes work the earlobe hangs freely. If these genes do not work the earlobe remains attached to the side of the face.
34. Name two inheritable characters.
Ans: The characteristics such as eye color, skin color, hair color, and free or attached earlobes are inheritable characteristics.
35. Name two non- inheritable characteristics.
If someone loses a leg in a car crash it would not be passed on, Shaving body hair, bodybuilding, Riding a bicycle, using a computer, and liking a sport are non-inheritable characteristics.

38. How many chromosomes are in the cell of the following organisms?
Man, Monkey, Cat, Maize, Onion, Pea.
Ans: see table above
39. What is the number of chromosomes in a somatic cell of drosophila?
Ans: 8
40. What will be the number of chromosomes in the gametes of Drosophila?
Ans: 4
41. Describe the Watson and Crick model of DNA.
Ans: Each DNA molecule is made of thousands of small units called nucleotides. These are four types of nucleotides in DNA.

According to Watson and Crick, the DNA molecule consists of two strands formed of nucleotides. The two strands of DNA are linked to each other by cross bands like a ladder.
42. How many types of nucleotides are in DNA?
Ans: These are of four types.

43. What is a haploid cell?
Ans: Gametes (sperm and egg) are haploid cells. They have half the number of chromosomes and are denoted by (n)
44. What is a diploid cell?
Ans: Haploid (n) sperm cell from male and haploid (n) egg cell from female fuse together and form diploid cell (2n). It is also called a zygote.
45. What is a zygote?
Ans: The zygote is the first cell from which the life of an organism starts.
46. Gametes are haploid cells. What do you think would happen if the gametes forming a zygote are diploid cells?
Ans: If gametes were diploid cells, the number of chromosomes in zygote could not be controlled constant and characters could not be maintained in the next generation.
47. An injury on a person’s body needs more and more cells for the repair of his body. What type of cell division do you think will provide more and more cells for his body repair?
Ans: Body cells divide through the Mitosis process of cell division. The mitosis process will repair the body.

Assessment Unit 2 Cell Division for the practice of the students.