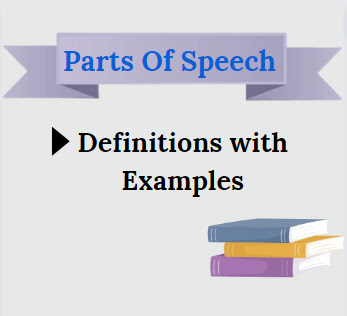 All Parts of SPEECH

What is a noun? Define a noun. How do you define a noun? If anybody asks this type of question, you may answer him as:

The noun is the name of a person, place, thing, idea, quality, or feeling.

It is a naming word and maybe the name of any action.

Qualities of a Noun

Examples of nouns used for things:

A table, chair, desk, clock, book, Quran, and computer are examples of nouns that are used for objects or things.

Examples of nouns used for ideas:

Justice, honesty, beauty and business are examples of names of ideas.

Examples of nouns of qualities:

Bravery, softness, hardness, honesty, kindness, fairness, love and hate are examples of nouns that refer to qualities or feelings.

What is a pronoun? Define pronouns. How do you define a pronoun?

The answer to these questions is the same. Here it is:

I, we, you, they, he, she, it, me, mine, us, our, your, them, their, him, his, her, its, myself, ourselves, yourself, yourselves, himself, herself, itself, all, none, any, some, anybody, somebody, anything, something, this, that, these and those may be exact examples of pronoun.

What is a verb?

How do you define a verb?

It is a word that is used to show an action, state of being, or occurrence of something.

Other qualities of a verb

Run, play, teach, learn, be, sit, stand, weep and sleep are examples of verbs. To see examples of kinds of verbs visit our other page Kinds of Verbs.

We shall cover all forms of all Verbs on another page.

What is an adverb?

How do you define an adverb?

Adverbs are another important part of speech. We shall try to define adverbs in different ways for your better understanding.

It is a word that can modify a verb, an adjective, or another adverb. In other words, we can say adverbs are modifiers of verbs, adjectives, and other adverbs.

Some more information about adverbs:

It is a word that describes or identifies the qualities of a noun, traits of a noun or tells the number of nouns.

The answer to these questions is not provided in any dictionary or any book on English grammar.

Articles are kind of adjectives. Due to their frequent use, they are described separately.

Examples: There are only three articles “a, an, the” in the English language. We have explained the kinds and use of articles on another page titled kinds of Articles and Uses of Articles.

As the word “Preposition” suggests, it is a combination of two words “pre and position”.

Conjunctions are the parts of speech that create links between different clauses, different sentences, and between words and phrases to create coordination.

And, but, because, therefore, yet, although, until, since, even, in order to, so that, as much as, if only, but also and rather than, etc. are examples of conjunctions.

Rules and uses in sentences will be explained on another page under the title Kinds and Uses of Conjunctions.

Interjections are the sounds that anybody produces to express his sudden feelings.

A sign of an exclamation mark ( ! )is necessary after these expression sound words.

We have presented All kinds of interjections with their examples and uses in sentences and rules under this topic Kinds and Rules of Interjections.

1 thought on “All Parts of Speech | Definitions | with examples”